EXPLORA – THE CHILDREN’S MUSEUM OF ROME – is the first non-profit and privately owned permanent museum entirely conceived for children, schools and families, open to public since 2001.

Explora is member of Ecsite, the European network of Science Centres and Museums, Hands On! International, a network representing the Children’s Museums in the world;  it is a site-specific museum, part of the O.M.R. of the Lazio Region and an Associate of the Italian Alliance for Sustainable Development (ASviS). The Museum offers children an opportunity to play, experiment and learn in the field as well as occasions for socialization and education; it also promotes the development of children’s cognitive and emotional capacities.

Explora is located in the area which was once occupied by the former Atac tram depot in via Flaminia 80, historically known as “Borghetto Flaminio”, in the heart of Rome midway between Villa Borghese and Piazza del Popolo. An area of 8,000 sqm, which the Rome town council granted to the Children’s Museum, has been restored and redeveloped with the support of private companies and state institutions involved in a major fundraising drive.

Explora consists of the museum’s exhibit pavilion, a free-access green area which includes a well-equipped playground, a kitchen dedicated to food education workshops, a bookshop, a gift shop, a cafeteria, a restaurant and a parking area.  After 12 years of growth and success, Explora is growing – the museum’s enlargement project launched in 2013 – is the final step for the redevelopment of the remaining 2,000 sqm area.  I see in the future – the fund-raising campaign – aims to collect € 2,500.000 to build new constructions and buildings for play, science and the environment.

An area won back to the city

Industrial ArchaeologyLooking-throughSun Energy
In 1998 the municipal area with the former Atac Tramway Warehouse, in Via Flaminia 80 was granted to Museo dei Bambini by the City of Rome: the buildings were completely abandoned and degraded, so they were recovered and redeveloped for expository use. With the restoration of buildings that were erected between 1870 and 1920, an important work of redevelopment was carried out: a degraded area was turned into a valuable landmark for children and families.
The design project has kept the historical memory of the industrial façade on Via Flaminia. Cast iron, the material the pavilion is made of, bears witness of recovery performed on the truss roof designed by French engineer Polonceau, a contemporary of Eiffel. The pavilion ‘was born’ out of the renovation of the cast iron structure designed by Polenceau, surrounded by a green urban area that is the main element of the site requalification.
The large glass walls and the skylight help harmonize the exhibit pavilion with the outdoor space, and allow visitors to gain a glimpse of functional architecture details and indoor recreational activities. The main element for the architectural design of the exhibition pavilion is Light, both natural and artificial. The natural light coming through the skylight roof, through the glass walls and the photovoltaic brise-soleil. The artificial light overnight coming through the wide glass walls that allow visitors to see the internal activities. Glass walls and light enhance the value and the inside and outside visibility of the architectonic components. 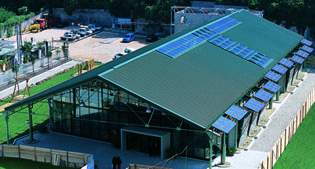 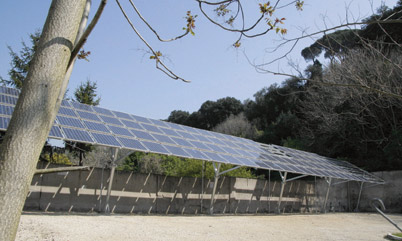 Explora has 2 photovoltaic systems: the first 15.2 kW photovoltaic system was built in 2001 as part of the European Community “Thermie” program (1999) in collaboration with Denmark (Cenergia) and Holland (Ecofys) (INNOPEX – Innovative architectural integration of photovoltaic energy in existing buildings). It was installed on the skylight roof and on the southern side of the pavilion. It was mounted on 12 tilt-adjustable panels, that vary the shading according to the season. 180 panels have been installed, 72 on the skylight roof and 108 on the side shelters. The system powers all the computers in the Museum and many games and exhibits. The second 18kW photovoltaic system was installed in 2007 in the parking. It is a car shelter consisting of 100 photovoltaic panels. It powers all the electrical devices in the offices, shop, and ticket office. An online monitoring device shows the visitors the amount of energy produced by the 2 photovoltaic systems. The second system was installed thanks to Conto Energia by GSE, the Government incentive for Architectural Integration.